If you are a Portland native, it may be a tradition for you to enjoy an English teatime at the Heathman Hotel’s Headwaters Tea Room. Now, the Heathman’s tea court has taken on a new Russian flare as a product of Vitaly Paley’s own heritage now woven into the dishes they serve. The ritual of tea drinking has long been a symbol of Russian hospitality and is seen as a cure-all in Russia for illness, hangover, and heartbreak. I had never visited the tea court at the Heathman Hotel, but recently received a special invite alongside other local writers to partake in a Russian tea seating on behalf of the new GM of the hotel, Daryn White.

As flurries danced from the sky, I quickly exited my Lyft ride and entered the door held open by the old English-style doorman to find the warmth inside the hotel. I located the lovely group of ladies, all invited to the event, and we made introductions before being seated in the tea court. When we were directed to our table, decorated in paisley table clothes and decorative Russian prints, my eyes immediately scanned upward towards the high vaulted ceilings and glimmering chandeliers. The focal point of the room was a two tiered centerpiece decorated with metal urns, greenery and tall feathers, as well as traditional Russian Babushka Semenov nesting dolls. My Jewish Grandmother from Russia bought me one as a kid.

They decorated the room for the holidays as well with a tea twist. Decorative teapots sat on each step of the stairwell, draped in garlands and ornaments. A tall Christmas tree stood against the wall with metallic Christmas balls dangling from its branches. The clink of teaspoons on porcelain could be heard throughout the room and the sweet smell of tea filled your nostrils. We all took out our cameras and cellphones to snap pictures of the decor. Every other seat had a traditional white porcelain teacup and the other seats had a Russian style caravan cup used on long train rides through Russia.

I was lucky enough to choose a seat with one of these unique metal chalices that housed a plastic drinking cup inside. All of the women discussed their writing careers and ordered tea from the menu. I ordered a tea named the Georgian Caravan, described as a smoky black tea commonly served on Russian caravans and enjoyed with a spoonful of jam to add sweetness. I was intrigued by the idea of adding jam to my tea, so I had to order it. 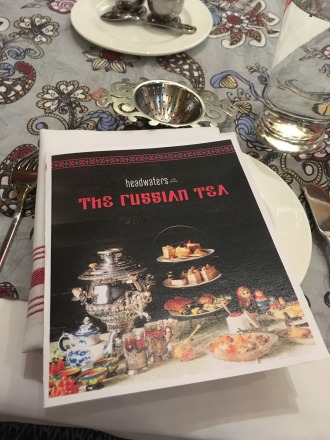 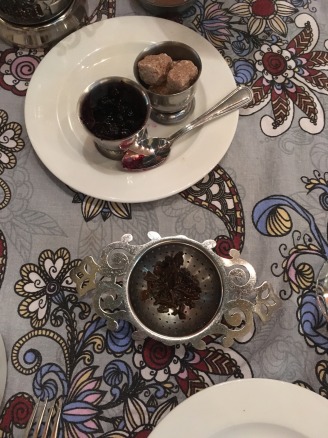 Also featured on the tea menu, were traditional green (Sencha) and white teas (Bai Mu Dan) from Asia, two English-style teas such as the Bungalow that is similar to English Breakfast Tea and Lord Bergamot similar to Earl Grey, and a sweeter tea made with local peppermint and chocolate nibs. There were also two non-caffeinated teas, one was camomile and rooibos and the other just peppermint.

We all ordered an assortment of teas, but the most popular choice was the Georgian Caravan. Before the hot tea even hit my lips, I became overwhelmed with its smoky aroma. It tasted like a campfire with a kick of caffeine. I added a small spoonful of mixed berry jam and it smoothed over the roughness of the tea with a hint of sweetness. My body finally warmed up from the inside. I enjoyed light conversation with my seatmates, while we waited for the food to arrive. I was the youngest attendee, and felt I had a lot to learn about the writing world from these ladies.

It was nearly 2pm, when the waitress carried out two towers of delightful treats to set in the middle of the table. Starting from the lowest rung, she described each mini morsel to us. On the bottom, we found khachapouri,- Georgian cheese bread with local honey, buterbrodi– open face rye bread sandwiches with assorted toppings, one with cream cheese, smoked salmon and dill, and another one with salami meat and a dollop of sauce and roasted red pepper, and at the center of the plate a flaky filo dough with cheese. On the second layer, there were stuffed eggs with sumac, mushroom piroshki, a traditional blini served with house cured caviar and sour cream, and a walnut-stuffed eggplant roll cooked in sunflower seed oil. 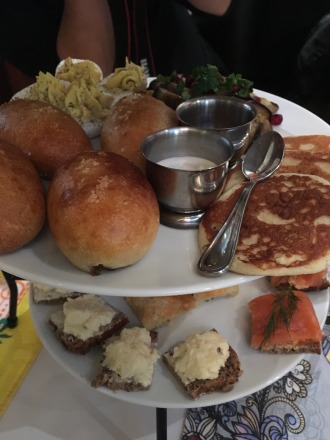 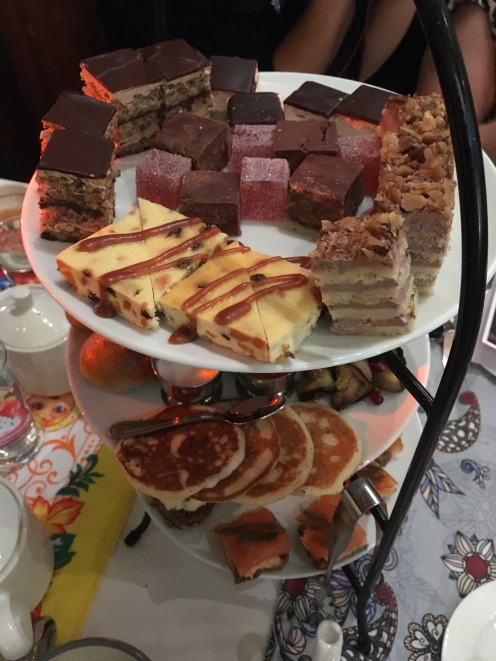 Before anyone could touch these delectable bites, cameras came out and snapped pictures of the towers from every angle like they were Russian supermodels. Once the final flash went off, we snatched up the tongs and started loading up our plates. I started from the bottom and worked my way up to the top. I tried one of everything. Unfortunately, I had to rush through the process due to being late getting back to my work.

So, although I was unable to truly sit and savor every bite, I did take note of the flavors and cultural expertise put into the food by Chef Vitaly and Executive Chef Ken Norris and Pastry Chef Jeff McCarthy. My favorite was the khachapouri, with its creamy savory cheese, because you can never go wrong with cheese in my book and especially not this full-bodied creamy smoked Russian-style Gouda. Second, was the buterbrodi with the smoked salmon that reminded me of Sunday’s growing up eating bagels with shmeer and smoked salmon. My third favorite came in a robust roll filled with mushrooms and a hint of salt that really brought out the flavors of the mushroom piroshki.

New to my palate was the traditional blini with caviar and sour cream. I’ve never tried caviar and the look of those translucent red pearls had my tongue anticipating something sweet, but instead it delivered something almost sour. It wasn’t bad squeezed between a small fluffy pancake, but it wasn’t my favorite. Of course, deviled eggs have always been my favorite so they were delicious, but nothing new for me.

I cleansed my palate with the smoky sweet Georgian Caravan, before moving from the savory flavors to the sweet. Moving to the top tier, I snatched up several of the mini layered cakes first and immediately found two that I loved. First, the steopka or grandmother’s sour cream and walnut cake, a recipe of Vitaly’s actual grandmother, was by far my favorite. The mini cake was both savory and sweet with the spongy cake layered with sour cream. I could eat a whole one of this and never tire of it. My second favorite, was the other layered cake with more of a local flavor of hazelnuts. This tort po kievski had a crunch full of nuts and a sweet cream of coffee buttercream. It had texture and made my tongue happy.

I took a bite of the other options, but none of them really excited me. The bird’s milk cake tasted like a s’more, and the zapekanka cheesecake tasted less sweet than my mother’s famous cheesecakes, but had a nice more savory and sour flavor. I didn’t try the gelee candy, because I don’t like foods that stick to my teeth. The chocolate and orange halva had the taste of a hardened piece of fudge with a hint of citrus. I enjoyed its flavor, but was starting to get a sugar high by the time I took a bite. Once, I came up for air from all the food I stuffed into my face, my mouth wore the flavors of this unique Russian menu. I only wish I could have taken my time to really enjoy each bite, but I am grateful for the whole experience.

You can enjoy this experience at your leisure for only $38 per Adult including the tea of your choice and there is also a kid’s menu for $16 each. It is a great social opportunity to make light conversation in the coziness of this wooden paneled room and the twinkle of the Christmas lights. You must make a reservation 48 hours in advance, because it is a very popular experience. The Holiday Tea Serving is running from November 25th to January 1st daily at 11am, 1pm, and 3pm. So, gather up the gals or your whole family and join Vitaly Paley for a Russian adventure for your palate.

*Update on seating: Just confirmed Russian Tea experience with Vitaly Paley will be on Saturdays with two seatings at 12:00 and 2:30 pm starting January 14th. Reservations can be made on Open Table.