It is always interesting to get a sneak peek into how other cultures celebrate the holidays. I’ve had the pleasure of celebrating Christmas in Jamaica with my family, in Australia, and now in Ecuador. We all have different customs and it’s fascinating to observe them.

I grew up in a very secular home, where we celebrated Chanukah and Christmas without the religious aspects of the holidays. My Dad was raised Jewish and my Mom was raised Christian Scientist. They both left their family’s religions behind to find their own spiritual paths. Instead, they followed a guru from India. They taught us right from wrong without the backing of religious morals. We learned to treat everyone the way we want to be treated. They also allowed us the freedom to find our own paths even if it took us back to the church or synagogue. We both explored our options and found ourselves drawn to Buddhism.

So, for us the holidays meant the traditions of being with our family. We loved lighting the menorah and saying the prayers and decorating the Christmas tree and wrapping gifts. Despite not knowing a whole lot about the true religious aspects of the holidays, I still enjoy observing the practices of other cultures.

In Europe, I visited the large Christmas markets at the beginning of December and loved this German tradition of mulled wine, cookies, and shopping for nutcrackers. Once, my family flew to Jamaica on Christmas Day and witnessed a black Santa riding a jet ski on the Caribbean ocean. On Boxing Day, all the locals had off of work and came to the beach to enjoy a relaxing day together. Australians celebrated with a large Christmas BBQ with family. We opened poppers with gifts and a paper crown inside. On Boxing Day, we watched the cricket match and ate leftovers.

Now our 7 month journey from Argentina to Guatemala has landed us in Ecuador for Christmas. At the start of December though, we started seeing Christmas decorations going up in Peru. At the lodge in the Amazon, they decorated a tree in the dining area. Large cities started erecting enormous trees in their main plazas. We were surprised to see candy canes and fake snow in the Southern Hemisphere. They seem to have adopted the American version of Christmas. Shops blast Mariah Carey and other Christmas songs from the States. Their Santa is also very white.

We reached Cuenca on the 22nd of December to find the whole colonial city decorated for Christmas. Lights hung across every street along with red and green streamers. The lights featured the outline of a Quechuan woman though, which is unique. All the shops sold wrapping paper, lights, nativity scenes, and baby Jesus. Several markets were set up around the main square selling gifts. 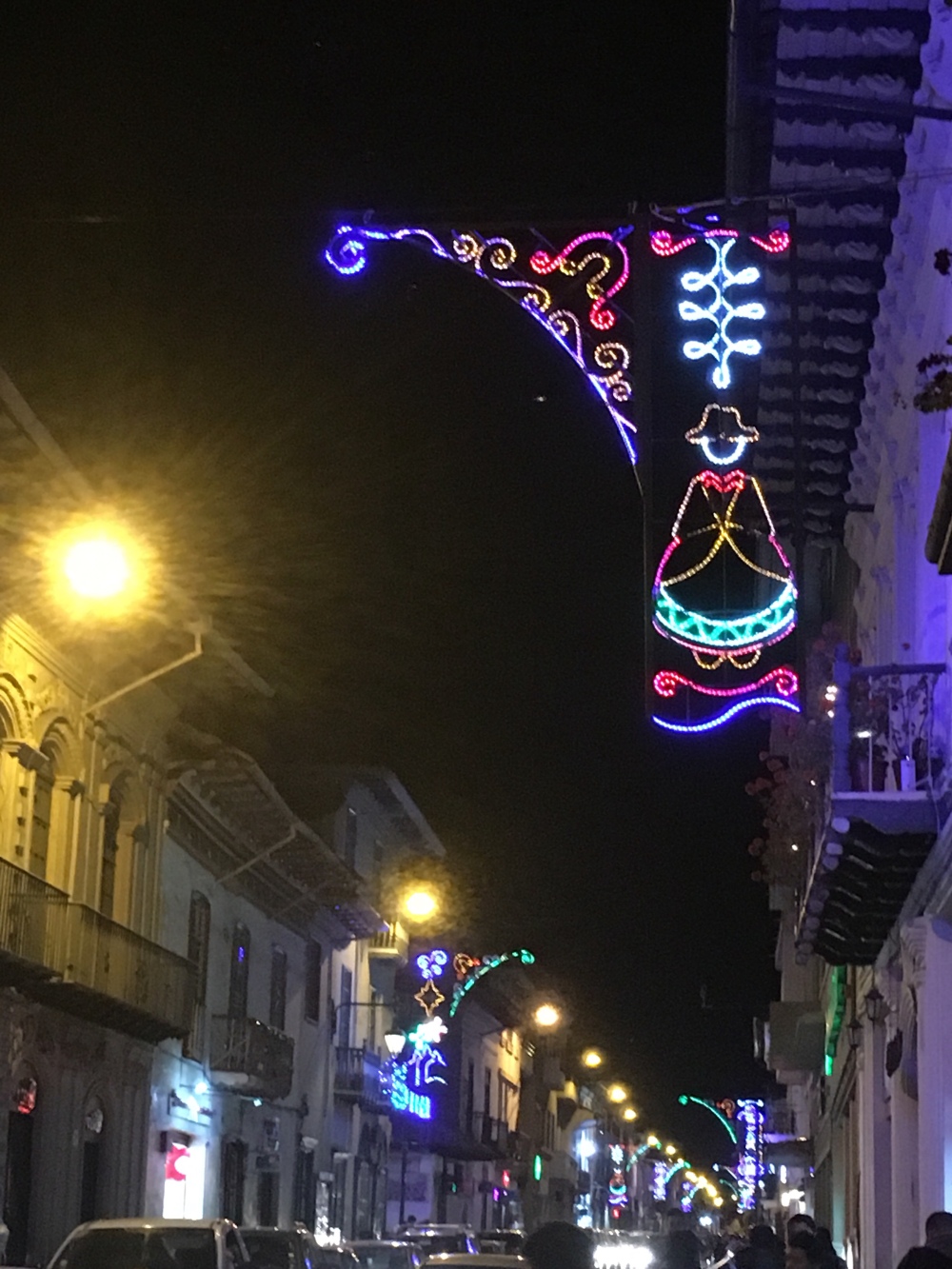 On the 23rd, we walked towards the square just in time to witness the military and police parading around the square. They wore their decorated uniforms and rode on white horses. The military band played and the local Bishop was escorted down the street under a red canopy. Then live music broke out from the gazebo, joined by loud fireworks banging throughout the sky. The top of one of the cathedrals illuminated with bright explosions. Stands along the side of the main cathedral sold Santa hats and reindeer headbands. We rejoiced in the opportunity to experience this spectacle. 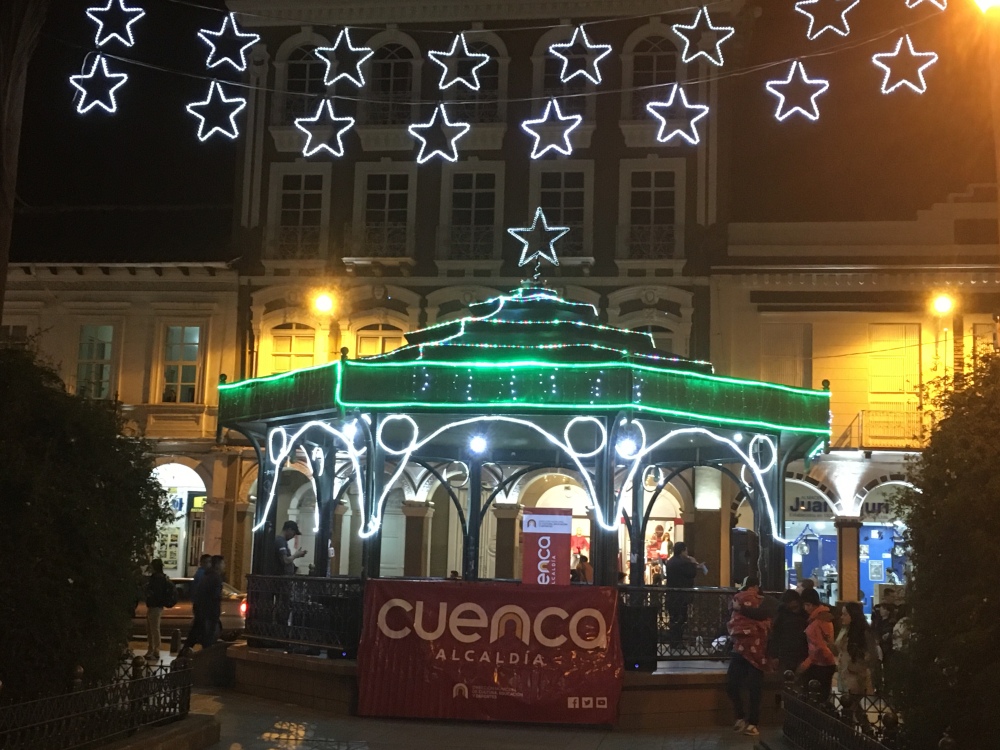 On Christmas Eve, we moved to Baños and our bus pulled up just as a parade of children dressed as Joseph, Mary, Jesus, and angels walked past. At the local market a large band played and families danced joyfully. At night we watched as a parade led Joseph with Mary on a donkey to the church for the birth of baby Jesus. I joined my husband who is a practicing Christian to the service.

Women carried their own replicas of baby Jesus in a basket into the church. We sang traditional American songs in Spanish as well as local songs. The entire town filled the Catholic Church leaving barely any standing room left. People dressed their babies up like angels. Though this all felt foreign to me, I enjoyed the service and a glimpse into their Catholic traditions. We stood, kneeled, sat and held moments of silence. We passed the peace to our neighbors and held hands in song and prayer. It felt joyful and exciting!

I’m not converting, but I can definitely appreciate the beauty in these practices. When Jesus was born we cheered and paraded into the street with song. Fireworks erupted around the city. Then we joined the young locals for some dancing at the club.

The one tough thing as a backpacker abroad on Christmas is missing my family! I miss our traditions of opening our stockings first filled with candy and little gifts. I miss my mom’s delicious baking of cinnamon buns or bread pudding and Christmas cookies. I miss decorating the tree with my sister. It’s hard being so far away from family on special days like this. At least Ethan is my family now and we can celebrate and enjoy these new experiences together.

Have you ever celebrated a holiday abroad? What did you learn about that culture’s traditions?