Guatemala has been a destination for Americans for at least ten years now, so it was no surprise that Antigua was swarming with them. The colorful colonial town, an hour outside Guatemala City, provides tourists with that authentic Guatemalan feel. The stone buildings are crumbling with age and the cathedrals overpower the plazas with bright yellow and orange facades. We got lucky to visit during one of the Sundays of Lent, when they celebrate Semana Santa before Easter. As we walked to our to favorite authentic breakfast spot, Rincón Típico, we noticed men strolling towards us in purple robes and hoods. We had no idea what was going on. Purple ribbons draped across the old stone protruding windowsills and along the entrance to the church doorways. We started to notice a theme around the city of purple, even the trees showered the sidewalks in purple flowers. It wasn’t until later in the day that we figured it out.

We continued our stroll through the cobblestone streets spying the ominous volcanoes peeking out from behind buildings and standing tall when spotted down wide boulevards. Antigua is known for its position amongst many active volcanoes. The volcanoes attract a lot of the tourism to the area. 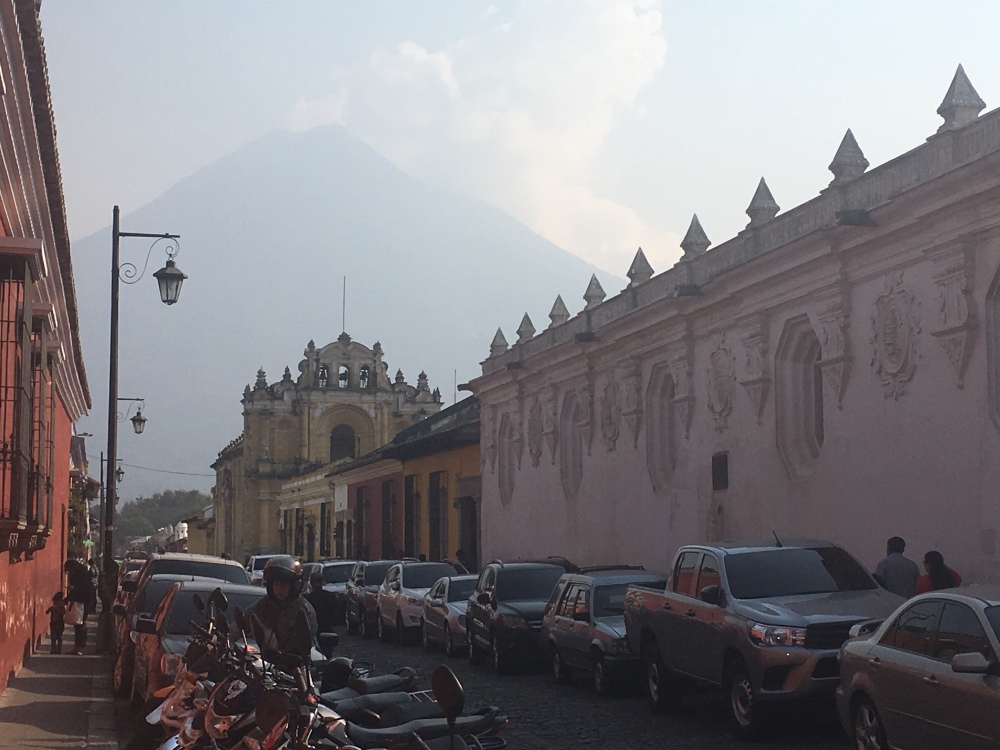 Tourists visit the city to climb the most famous one, Acatenango, that takes two days and brings you face to face with the spurting lava of another volcano, El Fuego. This trek requires warm clothing and the physical ability to climb to 4,000 meters. We heard it was one of the most amazing experiences, but we are saving it for next time. If you don’t have time for the two day trek, people also climb Pacaya, a smaller volcano that takes only five hours. Since we are limited on time this visit, we planned to just explore the towns. Antigua is definitely worth the visit. We wandered through the Plaza Principal on our way to the large Artesana Market by the bus station and found native Mayan women selling textiles and toting their beautiful babies on their backs, swaddled in colorful fabric. Toddlers chased pigeons around the center fountain and squealed when the birds took flight. Tourists sipped espresso around the square at the many local cafes housed under the aqueduct-looking arches. We enjoyed how vibrant and lively the city felt. 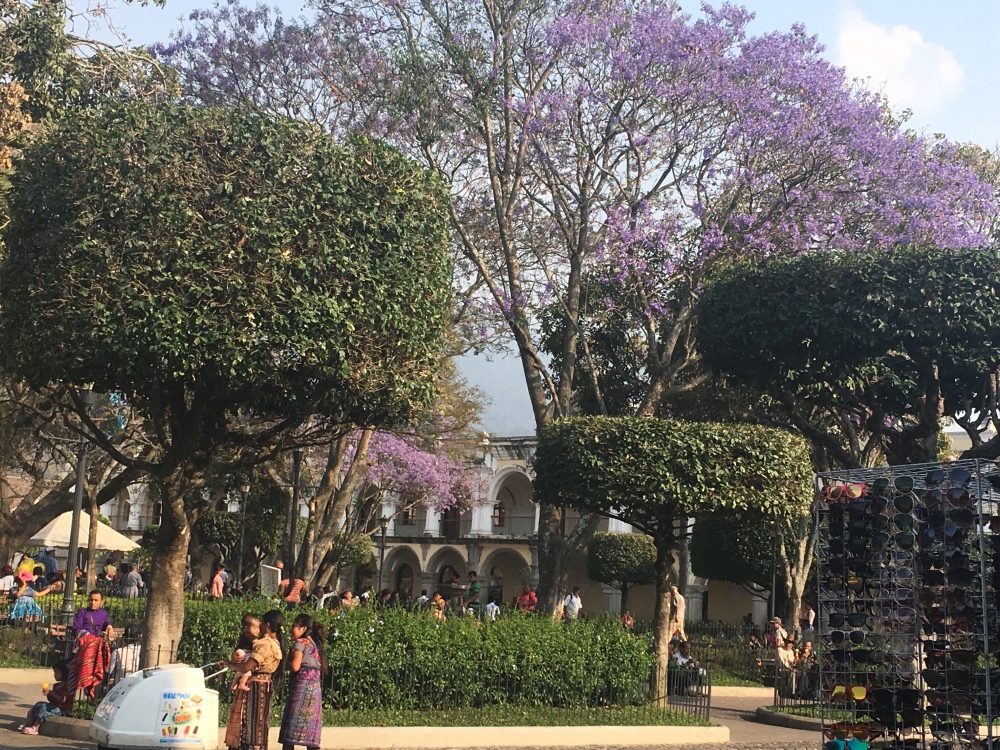 We also stopped for a coffee and some people watching on the plaza. If there’s one thing every Latin American town has, no matter what size, it’s a central plaza with a fountain and a prominent cathedral at its head. These are the things we will miss most about being down here. These plazas bring people together and serve as a central meeting place for everyone. In the US, most cities and towns don’t have this, which may be due to Latin America’s Catholic culture and history of Spanish imperialism that the US doesn’t share. When we left the cafe, we discovered a procession heading up the street with a platform held by men in purple robes with Jesus carrying the cross on his back. A marching band trailed behind them filling the air with boisterous sounds. We followed them to see what was going on. They passed under the golden arch that led to the north of the city. The streets were clogged with locals selling wares and tourists snapping selfies. We had to weave through the crowd to keep up with the parade. Finally, we reached a large street food market on the feet of an old canary cathedral with white embellishments decorating its facade like a wedding cake. The entire procession and crowd stopped at its grand doors. 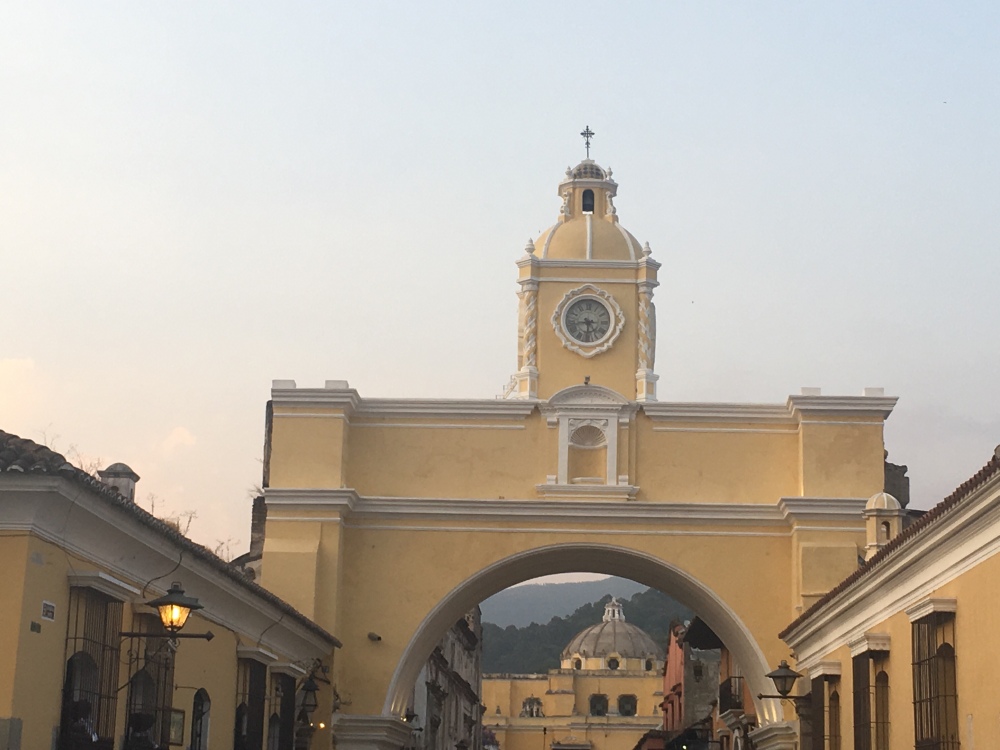 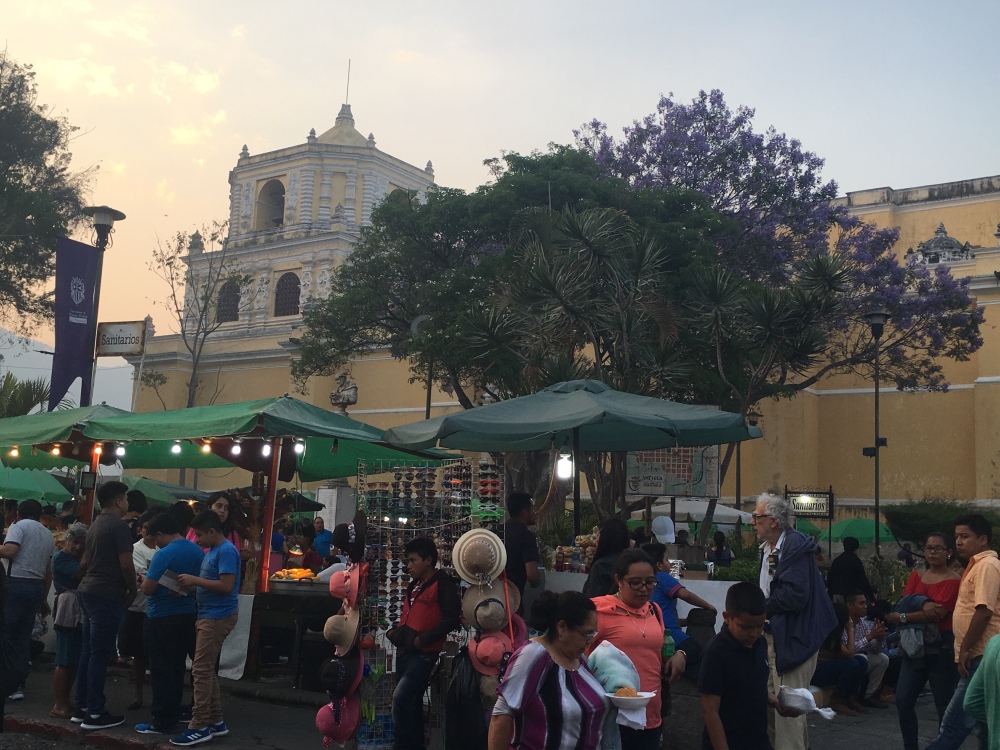 The tubas and drums filled the air with a deep rumbling as the floats of Jesus and of Mary were lifted up and down in the air. The men in purple robes tossed rainbow colored wood shavings on the ground behind them and men in neon green shirts moved in swiftly with brooms to sweep up the street. The whole square smelled of grilled meats and sweet corn emanating from the robust collection of food carts on the plaza. We could feel the heat of the humid steam coming off the grills behind us. They sold fluffy blue corn tortillas that local woman rolled with their hands, pupusas sizzled filled with cheese, shish kebabs flipped on the grills, and chocolate covered apples with sprinkles made children reach out for them.

Our eyes followed the procession to the church doors as the trombones sounded and the drums reverberated. Then a choir in the crease of the church harmonized and sang Ave Maria. As modern times go, everyone raised their cell phones to film the choir. Men sold mini figurines in purple robes. Ethan informed me that purple is the color of Lent. The parade and party went on all night snaking through the streets. We left the crowds though to grab some food. 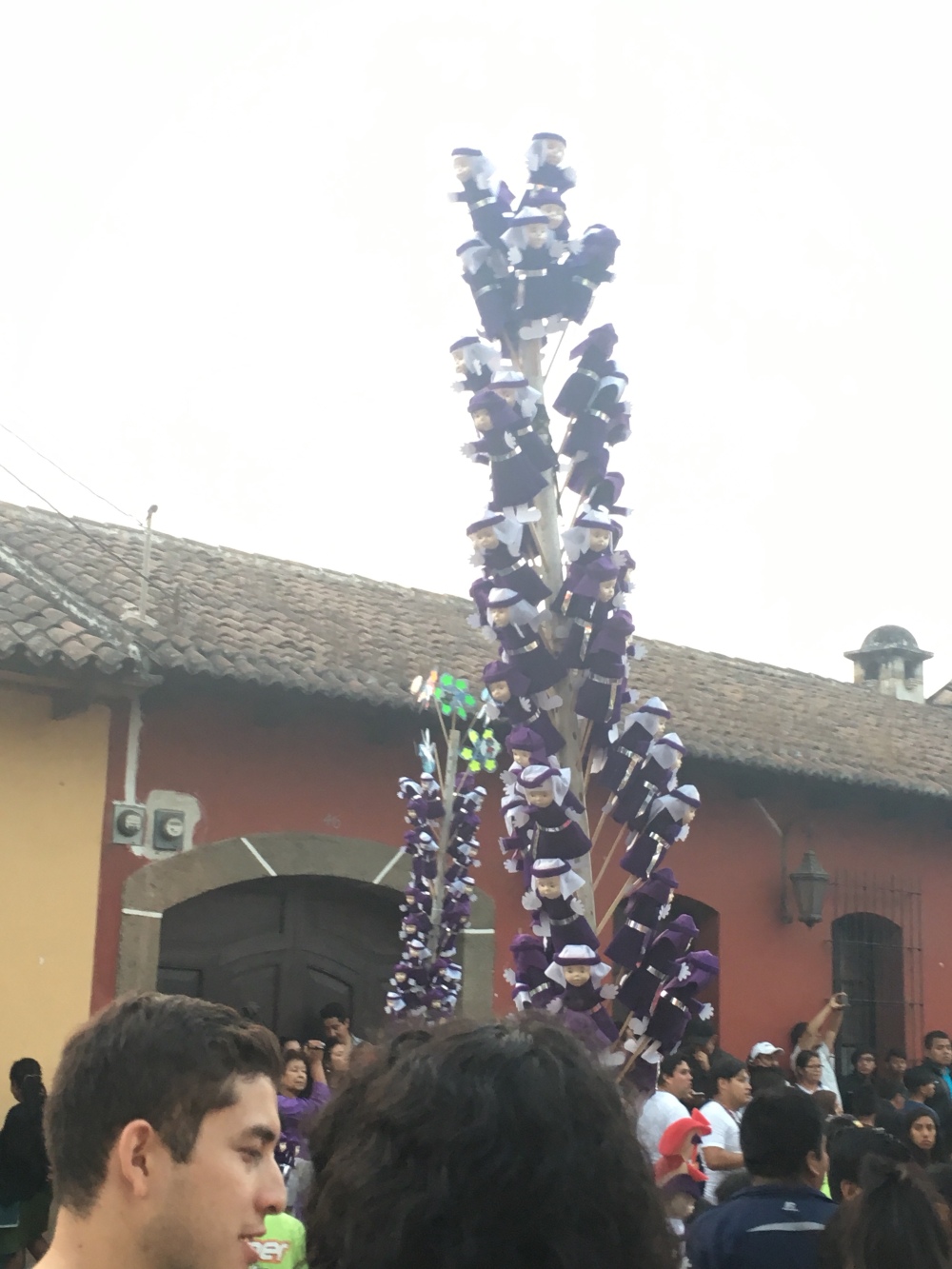 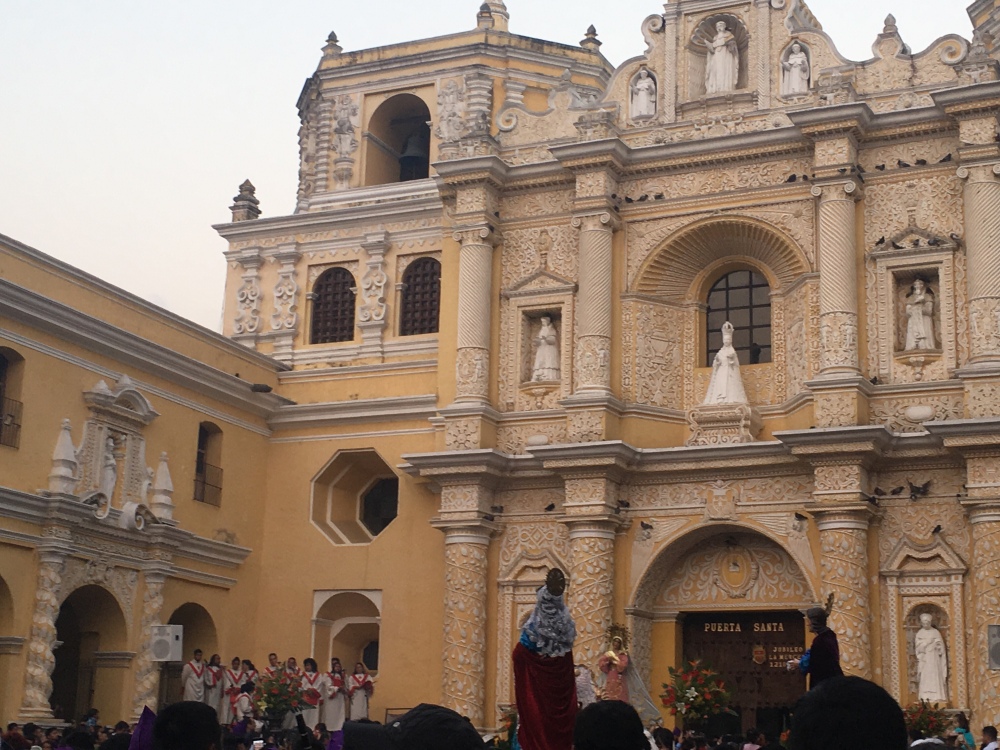 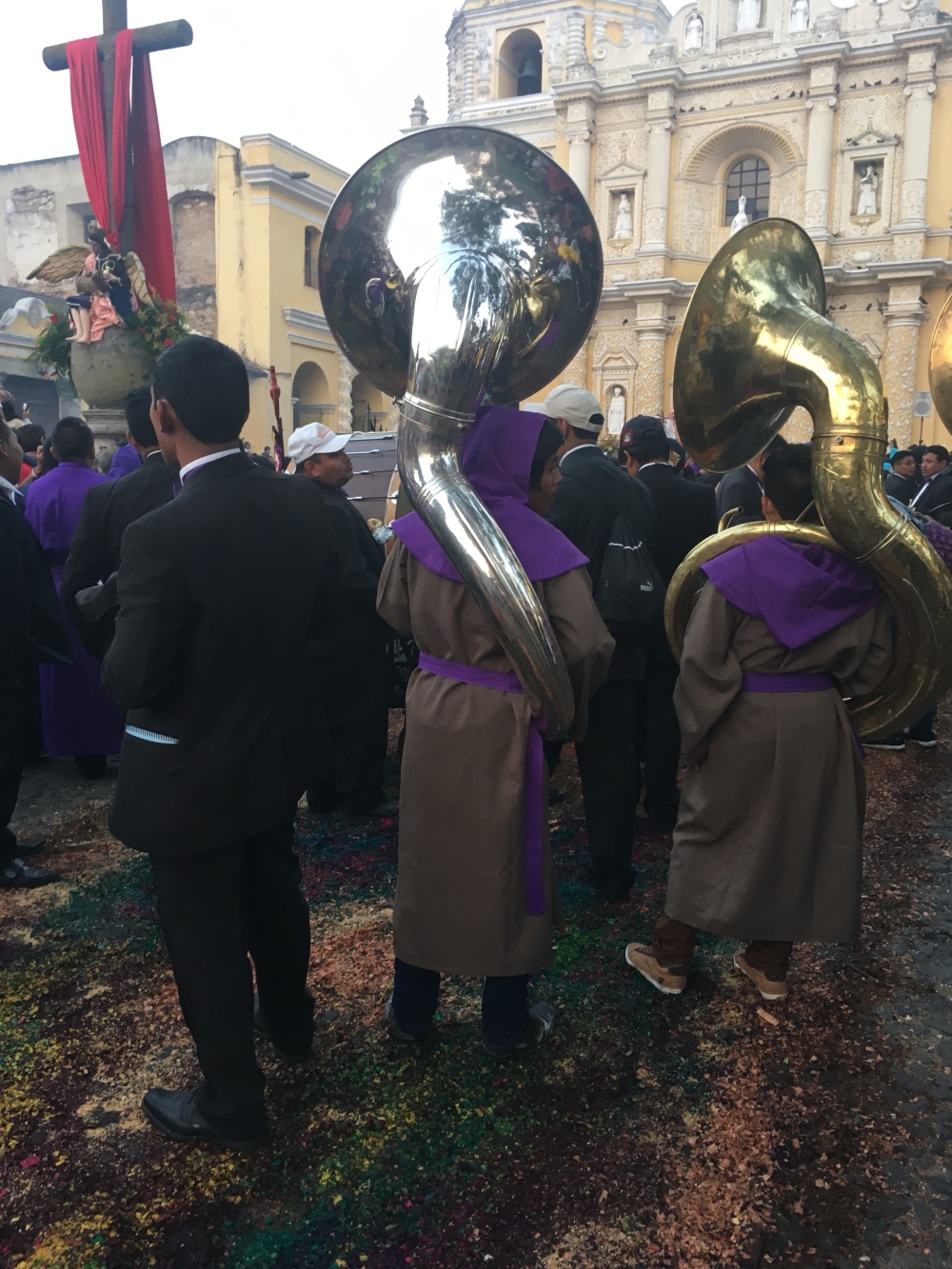 The aftermath of the Semana Santa celebrations decorated the streets with the pink, blue, yellow, orange, and green wood shavings the next morning. Monday morning the town fell silent as the locals recovered from the late night parading. Occasionally a rocket boomed in the sky as a leftover from the night before, and startled me. We were happy to have experienced such an authentic celebration on our visit to Antigua.